THE CASE FOR PROACTIVITY 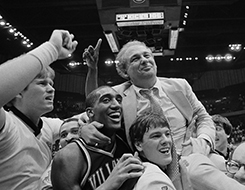 I’ll never forget Villanova University’s victory over Patrick Ewing’s mighty Georgetown Hoyas in the NCAA National Basketball Championship Game in 1985, still regarded as the greatest upset in the history of The Final Four. Despite being unranked at the end of the regular season (and having lost to Georgetown twice already that season), the 8th-seeded Villanova Wildcats found themselves up by 3 points with only 41 seconds to go when Georgetown coach John Thompson called a timeout. As he discussed strategy with his players, Villanova coach Rollie Massimino could be seen (but not heard) on camera frenetically exhorting his team. After completing the improbable win, the victorious coach was asked by a reporter, “What did you say to your team during that timeout?” Massimino replied, “I told them ‘Play to win; don’t play to avoid losing.’”

His words should be emblazoned on the frontal lobes of all who dream of success. Being tentative, playing defense, or remaining passive comprise the surest paths to mediocrity or failure. Far better it is to attack life on perpetual offense.

Iran across an interesting study last year that established a strong correlation between the internet browser a person chooses to use and their likelihood of success. There were two groups of people: those who use Internet Explorer or Safari, versus those who chose either Google Chrome or Mozilla Firefox. One of these groups is clearly more likely to succeed than the other. So which is it? The ones most likely to succeed are those who use…. Chrome or Firefox.

In all three cases, you’ve completely missed the point. It’s not that using a particular browser will cause you to succeed or fail, it’s that using either of the latter two is evidence of an approach to life that correlates strongly with success. And if you haven’t been approaching life that way, you can change today. I hope you will.

The difference between these two pairs of browsers is simple: the first two come already bundled with your device. The folks that continue to use them tend to be those who are satisfied with what they’ve been given. They are content with the status quo. Chrome and Firefox, on the other hand, are ones that you have to seek out and proactively download. Those who made the switch were people discontent with what was handed to them and therefore sought out something better. The difference is proactivity. It’s leaning forward, constantly looking for something better, forever seeking ways to improve. How do you approach life?