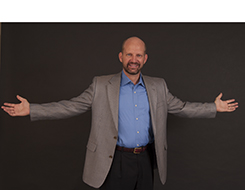 By Billy Riggs, the World’s Only Dis-Illusionist

You and I have something in common: we’re both illusionists. There are differences, of course. I perform my classic illusions on stage, cutting your executive assistant in three pieces, floating your company’s bookkeeper in the air, or making your CEO appear from an empty vault. But all of us perform much more elaborate illusions in our minds. Faulty beliefs about the marketplace, other people, and especially ourselves formed in early childhood now play havoc with what could otherwise be more productive and happy adult lives. Stripping away these illusions, then, is an essential ingredient to a contented and successful life. That’s where I come in. I’m not just an illusionist; I’m the world’s first and only DIS-illusionist.

The art of illusion is more than a hobby, or even a vocation, to me. It is a vehicle through which I have the privilege of setting people and corporations free from the crippling illusions we all carry around in our heads. Ironically, I was “disillusioning” hundreds of people as a speaker and counselor before I ever saw a parallel between the advice I gave hurting or confused people, and the large scale illusions I performed on cruise ships in my other life as a professional magician. Abracadabra! A new career appeared out of thin air. The result is a spectacular presentation of world-class magic for businesses, that also carries with it a paradigm-shifting message on life’s grandest psychological illusions.

Several years ago, during a very difficult time in my life, I discovered that disillusionment was actually good. Indeed, the very word “disillusionment” implies that one has been living under illusions. It is as though all of us wear virtual reality visors superimposing a false world over the real one, distorting our perspective, and filtering reality through an elaborate grid of assumptions and defense mechanisms. Consequently, the message our conscious mind perceives is often quite different from reality. The result is mental, emotional, relational, and vocational trauma. I’m convinced that about eighty percent of problems, both personal and professional, are the consequence of these illusions.

For example, if I perceive that my struggles at the office are the result of a female executive’s personal dislike of white Caucasian males, but the real problem is with the poor quality of my work or my perpetual tardiness, then all of my attempts to heal that rift will fail miserably. Or, if I believe that my sales volume is low because the economy is slow, while the real problem is with my sales presentation, I will feel powerless to remedy the situation. Hence, in most circumstances, my ability to formulate a workable solution to a given problem will be directly proportional to my ability to correctly identify it, which requires that one first be disillusioned. And who is better equipped to help expose crippling illusions than someone who has been “illusioning” and disillusioning people on stage for twenty years?

I once interviewed a highly gifted man for a job in the organization I ran. He was intelligent, capable, and energetic, but his employment record was disturbing. He had moved to a new job every two or three years throughout his adult life. Nevertheless, I hired him and – true to form – eighteen months later he made an appointment to talk with me about his intentions to resign, citing as his reason a lack of appreciation. The problem, as it turned out, was not that he was unappreciated, but that all of our acts of appreciation for him were negated by his particular grand illusion. As a child, he had been largely unloved by his parents, so now he felt that no one cared about him, irrespective of what they might say or do to the contrary. And because he mis-identified his source of discontentment in every job, he was never able to remedy it. Once I “disillusioned” him, however, he ended up staying with that organization even longer than I did.

Now I travel full time providing that same type of disillusionment for corporate managers, sales forces, associations, and conventions, and I derive great personal satisfaction from the increased sales, improved insight, and extended careers my presentation evokes. Frequent standing ovations have encouraged me to expand my repertoire of presentations. The original, called “Grand Illusions,” exposes life’s three most debilitating illusions and can be customized to meet the needs of any company or association. Other programs include: “Positively Magical Selling”, “No Illusions About Network Marketing”, “How To Achieve The Impossible”, “The Magic of Attitude”, “The Magic Touch: Positively Extraordinary Service!”, “Presto Chango”, “Click Magnet Magic,” and “How to Become A Born Leader.”

All of these include spectacular magic, humor, and audience participation, but with a powerful and unmistakable dose of truth and motivation. However, this blend of magic and motivation has benefits that go well beyond just its disillusioning content. I find that it has an incredible mnemonic advantage over a stand-alone speech. As employees retell year after year the story of how “Jim lost both of his shoes, and ended up with a bucket over his head, and has no idea how it happened,” or “Billy Riggs put a squashed banana in Mary’s purse, and then made it vanish without a trace,” or “He took Janet up on the stage, and made her float in the air, and she swears she doesn’t know how he did it,” they also call to mind and reinforce the powerful points those magical moments were designed to illustrate. In other words, when they recall my illusions, they also remember the positive disillusionment that went along with them, and again receive the benefit of the presentation.

The blend of entertainment and a message also serves as a real attention-getter. I’ll never forget speaking and performing on one occasion in the Great Lakes area. It was, for the most part, a wonderful audience. But one gentleman sat in about the fifth row not even trying to hide his disdain for yet another speaker. When I began my “Grand Illusions” presentation, he was actually reading a fully unfolded newspaper, holding it high in the air, and noisily turning the pages from time to time! I suspect that this was his attempt to make a nonverbal statement to the meeting planner about how boring such conferences had been in the past. But as the presentation progressed the gales of laughter, the gasps of amazement, and the content slowly began to work on him. He began to occasionally peek over the newspaper, then eventually he folded it and laid it in his lap. For the final twenty minutes he sat in rapt attention. Afterwards, he approached me to purchase a recording of my speech and remarked, “You’ve restored my faith in motivational speakers.” To be sure, communicating in a television age is a tricky business, but then, I’m a tricky guy!

Although my calling in life is to improve the quality of people’s lives through my presentations, I would be less than honest if I didn’t also acknowledge how much I also enjoy the entertainment end of my business. The howls of laughter, the repeated looks of utter bewilderment (on the faces of people who only minutes before had assumed they couldn’t possibly be fooled!), and the delightful interaction with members of the audience in every presentation make my work delightfully fun. And I still genuinely love every minute of it. The only thing that could make me love it more would be to “disillusion” those at your next event.