HOW TO BE FUNNY (PART II) 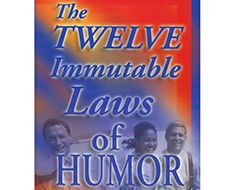 Nothing is worse than telling a joke and hearing nothing but crickets chirping in response. (Okay, cancer is worse, but you know what I mean.) A collective groan is almost as bad. When a joke evokes a groan it is usually the result of one of three causes:

This blog posting will reveal how you can evoke laughter from jokes that on the lips of others produce only groans. The key is the law of inflation.

Telling a joke can be compared to blowing up a balloon slowly, then deliberately popping it. It is essential that the balloon enlarge gradually, not suddenly, and that it be popped suddenly, not gradually. The proper telling of a joke creates tension in an audience, much the way air forced into a balloon stretches and stresses the rubber. Laughter is the sudden release of this pressure. If the “balloon” has not been inflated sufficiently, it cannot be popped successfully. Furthermore, the greater the tension, the more powerful the pop.

For this reason, each story must be told carefully, gradually increasing the audience’s anticipation of the punchline to its optimum level. If done properly, the audience will laugh even if the joke is not particularly funny! Another helpful illustration might be that of a water glass being slowly filled to the top so that an overflow is made possible (even guaranteed) by only a small amount of added water. The manner in which a joke is told should be seen as a means of slowly filling the audience’s “giggle box” so that when the punchline is delivered, even a moderately humorous story produces an overflow of guffaws.

All naturally funny people know that blowing up the comedy balloon usually requires exactly three “breaths;” rarely will two suffice, and four will sometimes be overkill. This is why there are usually three men sitting in a bar or three old ladies knitting, etc. in any joke. Why not two? Why not four? Why does a joke involve three athletes: a sprinter, a discus thrower and a pole vaulter? Why not just the first two? Why not add a high jumper for good measure? It’s because experience has taught every funny person that three is generally funnier than two or four. Three parts to your joke will usually build the precise amount of tension desired. Two will generally not produce enough tension to pop the balloon, but four sometimes gives the “rubber” too much time to adjust to the pressure, detracting from the power of the “pop,” the punchline.

Tension is built in several ways. The first is to apply law number one fully (read about it here). Tell your story with such complete abandon that the audience will eagerly anticipate the punchline of what they assume must be a hilarious joke. Acting as though you are resisting the impulse to burst out laughing as you tell the story is a powerful tension builder, and the thoroughness with which you sell the punchline before it is ever delivered will dictate in large measure the intensity of the laughs it generates.

Another way to build tension is to create within the story a progression – a progression of danger, or absurdity, or severity of consequences, or intensity of frustration, etc. Almost any progression will suffice, as each step in the sequence will add more tension to the balloon. In my book, The Twelve Immutable Laws of Humor, I include several examples of funny stories that employ this device. As the daring of the burglar, or the frustration of the auto mechanic, or the anxiety of the policeman, (etc.) increases, so does the audience’s anticipation of the punchline.

Note that the story would not be fundamentally changed by having only 2 guys sitting in a bar. The logic would be unchanged, and the punchline would be delivered word-for-word the same, but it would not be nearly as funny. It is the building frustration of the story’s central character that elevates the story from merely humorous to hilarious. This is the Law of Inflation. In a future blog, I’ll reveal the Law of Prompting.

Billy also teaches people how to become great (and funny) public speakers. Read about it here.