THE THREE KEYS TO INFLUENCING PEOPLE 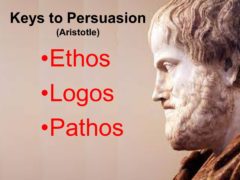 Leadership, at its core, is the ability to influence other people. Almost 24 centuries ago, the philosopher Aristotle summarized what he believed were the most salient characteristics of a highly influential person. He described them in his native Greek language as Ethos, Pathos, and Logos, words that we might translate as credibility, passion, and logic. This holy trinity of persuasion remains as reliable a guide today as it was more than two millennia ago.

Though times have changed, people remain fundamentally the same. The factors that magnetically attracted people to this ancient master will do the same for any leader who follows his pattern. It is no wonder then that Aristotle’s lecture notes have survived for 2400 years, and are still studied today. Among his students was Alexander the Great, whose ability to induce others to follow him ranks him as one of the greatest leaders of all time. Exploring these foundation stones of influence is critical to becoming a highly effective manager.

Ethos is a Greek word which has been transliterated directly into English and refers to the distinctive character of a people or an era. It also forms the root of the English word “ethics.” As Aristotle used it, the term ethos refers to the credibility the leader enjoys or lacks. Ethos, then, is the cornerstone of effective leadership, for without it others have no reason to listen, let alone internalize and act on the message delivered. Aristotle, in turn, broke down this concept into its three constituent parts.

The first component of ethos, he believed, was phronesis, roughly translated “intelligence.” Before a leader can hope to make a life-changing impact, it is essential that employees believe that their manager is a reasonably intelligent person and is knowledgeable about the product, services, and organization being led. For this reason, thorough preparation for each meeting, each memo, each decision is mandatory.

The second aspect of ethos, according to Aristotle, was arête, virtue. People are more open to learning from those they believe to be genuinely good, fair and honest. Managers who show preferential treatment to some workers over others are undercutting their own ability to impact both the favored and the unfavored, for they gradually lose the respect of both. Years ago I read of a survey of 30,000 frontline workers from a multitude of fields and professions. One of the questions asked was, “What quality do you most demand in a boss?” Only one characteristic was listed first or second on every single one of the surveys: integrity. People will not follow someone they don’t trust implicitly. They might obey grudgingly if the manager wields enough power, dangles enough carrots, or deploys enough sticks, but they won’t willingly follow.

The final component of ethos, according to the ancient Greek educator was euphonia, literally “good knowledge.” The term, as used by Aristotle, referred to a noble intent, leading for the good of society or the good of the led rather than for personal prestige, profit, or gain. If a boss is clearly in it for himself/herself, others will be disinclined to follow, and likely to even try to sabotage the success of their manager.

A hallmark of highly effective leaders is their passion. Workers sense urgency in their leader’s words, intensity in his or her eyes, facial expressions, and body language that demands a response. Important messages flow from the leader’s lips as though life and death hang in the balance. He or she is animated and active as though trying to persuade employees to evacuate a burning building. It is this combination of energetic motion and forceful speaking that holds workers spellbound. A leader who exudes no enthusiasm, who delivers messages devoid of feeling, will never ignite a spark in employees’ hearts.

The final component of persuasion is, quite predictably, a logical, cohesive argument. Salient points are built layer upon layer like the bricks of a house, each one resting on those that were laid before. Sadly, this is the least important of the three, a point driven home by the prevalence of scores of philosophies and world views that are at best indefensible and at worst insane. Nevertheless, a well-reasoned argument – all other factors being equal – will usually prove more persuasive than an illogical one.

Once again, the need for a boss to think through each decision is underscored, and the need to inform employees of the “why” behind each requested activity is imperative. You must make certain that your decisions make sense not only to you, but to those being led.
Leadership is a cocktail of these three ingredients. Leave out any of them and the brew is weak. Ignore all of them and the cup is empty. Great leaders measure themselves by their Ethos, Pathos and Logos.

PURCHASE BILLY RIGGS’ BOOK ON LEADERSHIP, How to Become a Born Leader.