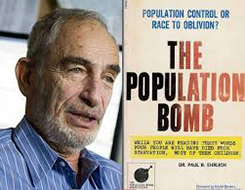 In 1968, Dr. Paul Ehrlich released his international bestseller, The Population Bomb, predicting the starvation of hundreds of millions of people before 1980. Since that time, the world’s population has doubled, while starvation rates have dropped by 95%.

The day after the election of Donald Trump, the country’s leading liberal economist, Nobel Prize-winner Paul Krugman wrote, “It really does now look like President Donald J. Trump [has won], and markets are plunging. When might we expect them to recover? A first-pass answer is never… So we are very probably looking at a global recession, with no end in sight.” The next year saw one of the greatest bull-market runs in history.

For a decade prior to the dawning of this new millennium, computer “experts” prophesied that dire catastrophes would occur at the stroke of midnight when the calendar rolled over from December 31, 1999 to January 1, 2000. Computers would crash, airplanes would fall from the sky, the stock market would tumble, data transmission would cease. But none of that happened. At the risk of patting myself on the back, I gave numerous speeches in 1999 in which I boldly stated that the century would turn with precisely zero harmful effects. How did I know? Because I’m not an expert!

I could confidently and publicly proclaim that day that Y2K would pass without incident the same way I knew Krugman would be wrong in November, 2016. When I heard the economist’s “expert” opinion, I immediately turned to my mother (whom I was visiting at the time) and announced, “I’m going to go buy stocks!” I wish I had bought more.

I might also have instinctively known in 1968 (had I not been a kid at the time) that Ehrlich would almost certainly be wrong, too. Likewise, the global warming alarmists will probably turn out to be wrong, as well, for this simple reason: experts know a lot about the past and present, but they’re horrible at predicting the future. To quote the immortal Yogi Berra, “Predictions are really hard to make, especially about the future!” In almost every instance in which this phenomenon has been studied, a group of ordinary people turns out to be far more accurate in predicting future events and trends than experts in any given field. If experts picked stocks the way they predict the future (in their own fields), you could become fabulously wealthy in a year by just buying when they sell and selling when they buy.

A specialist’s expertise apparently has the effect of blinding him or her to a thousand other mitigating bits of information from other areas of study. They routinely suffer from intellectual tunnel vision. Like the six blind men in the parable who felt different parts of an elephant and pronounced authoritatively that a pachyderm is like a rope, a python, a fan, a wall, a spear, or a tree trunk depending on whether they felt the tail, the trunk, the ear, the body, the tusk, or the leg, “experts” often possess far less comprehensive information (despite their own personal detailed investigations) that any ordinary sighted person standing 20 feet away. It is the non-expert who frequently possesses the fuller picture.

Even more troubling, after experts are proven wrong they often double-down on their predictions and make them even direr. Their self-esteem depends so heavily on their presumed intellectual superiority that admitting they were wrong is not just embarrassing; it constitutes a repudiation of their own self-worth, the invalidation of their reason for living, the puncturing of their inflated egos. They therefore tend to become impervious to countervailing arguments and stake out their original positions even more dogmatically than before, pronouncing that only their timing had been wrong, not their underlying assumptions. There is, of course, safety in such a prognostication. No doubt, Krugman will one day be “proved” correct when the global economy begins to ebb again, as it always does, eventually. But will he admit he was wrong and that the new downturn was a part of the natural economic cycle, or will he claim that his analysis was correct all along? I’m betting on the latter. After all, he’s an expert.

Interestingly, Janet Yellen – until recently the chairman of the Federal Reserve – announced that there should never again be a collapse of the financial system, because the Fed had finally mastered the art of managing monetary policy. Don’t bet on it. She’s an expert, and she’s definitely wrong. There will be a massive meltdown in the global financial system and the world economy in the next few years (maybe months), and it will almost certainly be worse than the crash of 2008. This is the unavoidable result of record indebtedness by governments, corporations, and individuals all over the world. Somewhere, somehow, the chain of loan defaults will cause first one, then another financial institution to fail and the dominoes will inevitably come cascading down. When you hear faint murmurs of rising foreclosures, bankruptcies, falling home prices, or a small bank failure in a galaxy far, far away, move your money that very day to a safe haven. Don’t wait until the bank failures make the front pages of the newspapers. Protect your downside. You can trust me on this, because I’m definitely no expert.